Mark C. Smith was elected Pastor of Remlap First Baptist Church in April 2014.  He has pastored in Alabama for over 30 years.

Pastor Mark  grew up in Birmingham, AL.  At the age of 7 he accepted  Jesus as his Savior and was called to preach around 16 or 17 years old.  Mark graduated from Banks High School and married his high school sweetheart Rodna Fondren.  He then attended Samford University.  After graduating from Samford, Mark attended and graduated from  New Orleans Baptist Theological Seminary.  Mark and Rodna have two grown sons, Stephen and James.  Stephen is married to Julie and have Mark and Rodna's only grandson, Josiah.  James is married to Sara.

Pastor Mark's  hobbies include golf, reading, playing the guitar, and spending time with family and friends.  His heart's desire is to not only communicate the gospel message clearly, but to be a good pastor. 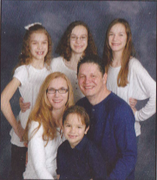 Scott has Served in many positions within FBCR over the past 4 years, 2013 to Present.

He has had the privilege to serve as Co-Interim Pastor, Pastor Search Committee, Church Committee, VBS Worship Leader, RA's, Interim Youth Pastor, Men's Bible Study Co-Leader, Children's Ministry, Adult Choir, and is presently the Sunday School Director. He is blessed to have been entrusted to these responsibilities and opportunities.

Scott received a Bachelor of Theology in 2005, and has aspirations to continue advanced studies towards a Masters Degree. He has four  "Saved" children attending Southeastern School system!  He and his lovely wife, Laura, have worked closely with Southeastern for over 14 years. They have built wonderful relationships in many arenas that expand from our teachers, coaches, principal, parents, and on into local recreational leagues. They are both dedicated to their neighbors within Woodhaven Lake and presently serve in several positions. God has settled them only 3 miles from their Fellowship.

Scott answered the call to the ministry at Gardendale First Baptist Church. He was Licensed under Dr. Steve Gaines in June 2002. He was ordained into the Gospel Ministry in January 2007 at Northpark Baptist Church under the leadership of Dr. Bill Wilkes. He also served as a deacon and teacher during this timespan. Scott and Laura have had the privilege to serve and lead in so many other capacities at GFBC 1995-2001 and NPBC 2002-2012 over the past 20 years.

In 2007, Scott founded Omega Fire Ministries. He and Laura traveled for 4 years doing an improv drama titled, "Revealing the Deceiver". Scott wrote this drama to expose how Satan has an alternate plan to destroy individuals, families, and fellowships. This ministry enabled him to experience a worship that went beyond denominations and race. This gave us a fresh perspective about God's love for all people while looking past divisive doctrines that inhabited the walls of many buildings.

This birthed a conviction to see the "Church" as God's Kingdom and not a personal country club. These days would bring Scott an abundance of on the job training. This call gave him the opportunity to lead, evangelize, and preach the Word of God. His heart broke during these years seeing so many people, families, and pastors that were hurting in silent desperation. However, seeing the lost saved and many restored fueled a passion that set his Heart on Fire until this very day!

“After consulting the people, Jehoshaphat appointed men tosing to the Lord and to praise Him for the splendor of His holiness as they went out at the head of the army, saying: “Give thanks to the Lord, for His love endures forever.” As they begin to sing and praise, the Lord set ambushes against the men of Ammon and Moab and Mount Seir who were invading Judah, and they were defeated. II Chronicles 20: 21,22

Obviously, King Jehoshaphat was in a real predicament. His kingdom was about to be attacked by forces too strong for him to resist with a conventional army. Recognizing he was powerless to fight against such a huge army, he humbled himself before God and called on his people to pray for God’s deliverance.

So what did God decide was the best way to answer their prayer, and that would also bring Him the most glory? His plan was to show them how puny their weapons were compared to His strength. The way He would do that is by sending the choir into battle first – in front of the army! I wonder how many choir members showed up for practice before the event took place? I’m sure the ones that did, were struggling with a lack of confidence and/or butterflies in their stomachs.

To me, this biblical story illustrates the importance of a choir, praise band, worship teams, and media and sound personnel in leading the congregation into the presence of God Jehovah each time we gather to worship. I’m sure not every singer in King Jehoshaphat’s choir had excellent voices, but they all knew the importance of using the talents God gave them to glorify His name. They understood the importance of their role in honoring God and using the talents He had given them to give Him praise. With the choir leading the way with praise, Jehoshaphat’s army showed that they were relying on God’s power alone to save them.

Our choir, worship teams, praiseband, and sound/media personnel all are using their talents as a tool for spiritual warfare in leading the chargeagainst the Enemy of Darkness.

I praise God for each of you involved with our music program. I continue to be thankful and encouraged with your faithfulness and with the new people that continue to join with us.

Ellie graduated from J.B. Pennington High School and attended Wallace State Community College and UAB earning a degree in Computer Science and Business Management.  Later she attended Kaplan University’s Distance Program and earned a degree in Legal Studies.  Prior to coming to First Baptist Church Remlap, she worked for an electronics manufacturing company in Huntsville, Alabama for 20 years where she held several positions; Quality Control, Document Control, Executive Administrative Assistant, Human Resources Assistant and ending her career as a paralegal in the company's Legal Department.
Ellie married Dwayne Speakman in 2012 and they live near the Dallas-Selfville Community just outside of Locust Fork, Alabama.  Together, they are raising Ellie’s two sons, Allen and Reuben, to be young men with faith in God.
Ellie has always felt a desire to put her talents to work for the Lord.  In previous years, she worked with the Church Hostess and Children’s Ministries at a former church in Palmerdale.  Now, she is thankful for the opportunity to serve as the Church Secretary for First Baptist Church Remlap.